These articles are brought to you care of the Conversation UK.  Thank you ﻿Anthony ﻿Organ for bringing them to our attention!
This article is brought to you by our communications officer, Caitlin Curry.  To view the original post and to read more articles on conservation, science, and life as a wildlife geneticist, go to her website, MyLifeIsCrap.org.
Beast in the Middle East

Camera Trap Photo of Asiatic Cheetah
July 16, 2014 -- An article published last week by the Conversation UK presented the idea of using captive breeding to help the Asiatic (or Iranian) Cheetah in its fight against extinction.  Captive breeding for bringing endangered species “back from the brink” isn’t a new concept.  In fact, it has been done multiple times through San Diego Zoo Global alone, bringing back species which were once extinct in the wild.  Previously, I have talked about the Scimitar Oryx.  Also, in 1982 the last remaining 22 California Condors were brought to the Wild Animal Park (now the San Diego Zoo Safari Park) to start a captive breeding program which has been a smashing success, growing the total population to 435 birds, 237 of which are flying wild.

The Asiatic cheetah has a small and shrinking population with only 50-70 animals remaining within 15 reserves in Iran.  Could captive breeding be the answer?  When a species’ population count is this incredibly small this type of a program seems both reasonable and manageable.  And, with successes like the Scimitar Oryx and California Condor, it even sounds achievable.  But, are captive breeding programs a reasonable option for large carnivores? 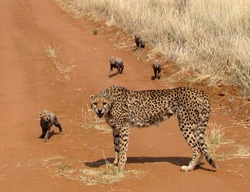 Shiraz & Cubs at Bellebeno, 2005 ©Caitlin Curry
Captive breeding programs like this are tricky and there is no guarantee for success.   When the intention is releasing them back into the wild to live on their own, the animal has to be cared for in a completely different manner than their captive-living counterparts.  They can’t be too habituated to humans and, when it comes to carnivores, they need to have the strength, agility, stamina and cunning to hunt for themselves.  Both would be difficult to accomplish in a captive setting, especially without a wild mama-hunter to teach them the ways of the world.  Not to mention the amount of space it would require.  Unlike the Scimitar Oryx, an Asiatic cheetah program couldn’t take place at a zoo.  It would need to be implemented within their natural habitat with enough room to emulate wild living while still being able to carefully manage breeding.   It could be possible to have the entire population as the captive population (as what we population geneticists call the founding population) meaning the entire gene pool of the species would need to be managed.  Care would have to be taken to prevent accidental selection for tameness while preserving the genetic variation of the species (Frankham et al 1986).

There have been captive cheetahs who have been successfully released into the wild.  In 2006, the Cheetah Conservation Fund released a female cheetah, Shiraz, and her cubs, Sheya, Linyanti, Omukumo and Nehale, after “training” in a fenced game farm.  While mama had been captive for many years, she was wild-born herself and was able to successfully teach her captive-born cubs how to hunt.  This could have been the key element that contributed to the cub’s success after being released at Erindi Private Game Reserve in Namibia.  A seemingly common issue which has been seen with the release of captive cheetahs, whether they were wild- or captive-born, is they have a higher propensity to become a “problem animal” hunting livestock instead of wild game.  Proper “training” and placement of release could reduce this risk.  As they say in dog training, “set them up for success.”

Something like this will also cost a bloody fortune, especially if it’s to be managed properly.  With the Asiatic cheetah population so small, I believe a carefully managed captive breeding program could be possible as long as someone can find the funding, space and personnel needed to pull the operation off in the Middle East.
Caitlin Curry is a PhD student at Texas A&M University in population and conservation genetics specializing in African wildlife genomics.